The Good News: California going single-use plastic grocery bag free! A First for a US Nation.

California heading to become the first state in the nation to ban single-use plastic grocery bags after the legislation won approval from the state Assembly.

SACRAMENTO — California appears headed to becoming the first state in the nation to ban single-use plastic grocery bags after the controversial legislation won approval from the state Assembly, just days after lawmakers rejected the measure. Eight Assembly Democrats who initially opposed or abstained on the bill voted for it the second time around after environmentalists met with them one-on-one to explain the impact it would have on their constituents. The measure, which passed 44-29, is expected to pass the Senate on Friday.
The fight over Senate Bill 270 was reminiscent of the epic, tortuous battle over California’s “bottle bill” — requiring a deposit on beverage containers — in the 1980s. Environmentalists and legislators in the Golden State are hoping the “ban the bag” movement will now spread to other states.

“We have a real opportunity to signal to the rest of the country that a cleaner environment and an expansion of jobs are not incompatible,” said Sen. Kevin de Leon, D-Los Angeles, one of the bill’s sponsors and the next leader of the Senate.
With the Legislature approaching the end of its 2014 session, a second bill sought by environmentalists that would regulate groundwater pumping for the first time in the state’s history will be taken up in the Assembly on Friday, after passing the Senate late Wednesday. The proposal will be considered with a companion bill that extends the deadline for some groundwater basins to comply with the new rules.
The bag ban, touted by environmentalists as a way to reduce a particularly noxious form of litter because it kills marine life, faced intense opposition from plastic and paper bag manufacturers.
Earlier this year, debate on the measure centered on jobs and the environment, but in recent days, criticism of the proposal became all about the 10-cent fee stores must charge for paper and thicker plastic bags under the bill. Many Assembly members who voted against the bill on Monday criticized the fee, a common provision of dozens of local ordinances, saying it would punish poor people.
Environmental groups argue that low-income shoppers are protected because the bill says anyone who qualifies for food stamps or a nutrition program for low-income women and their babies can get paper bags or reusable plastic bags from grocery stores for free.
(….) 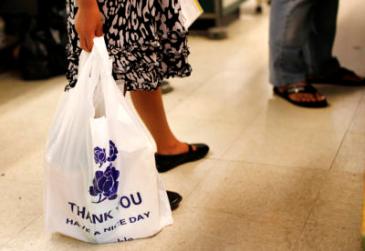 Studies on the impact of San Jose’s bag ban show that the percentage of customers walking out of stores with no bag has increased from 13 percent to 44 percent and that plastic-bag litter has been dramatically reduced.
“In the end, it was the reports of overwhelming success of this policy at the local level that overcame the political attacks and misinformation from out-of-state plastic bag makers,” said Mark Murray, executive director of Californians Against Waste.
The influential environmental group, which pushed through the bag ban, is the same group that was key to enacting the bottle law a quarter-century ago.
The American Progressive Bag Alliance and Hilex Poly, a South Carolina-based plastic bag maker, have spent more than half a million dollars in lobbying fees and campaign contributions to kill more than a dozen proposed plastic bag bans in California in recent years.
In January, Sen. Alex Padilla, D-Pacoima, the bill’s author, announced a breakthrough compromise with some of the legislation’s other opponents. He agreed to make $2 million from the state’s bottle-and-can recycling fund available to California plastic bag makers who want to retool their operations and instead manufacture reusable plastic bags that meet the bill’s standards.

“A throw-away society is not sustainable,” Padilla said. “This is good for California and reflects our values as a state that cares about the environment, sea life and wildlife.”
Contact Jessica Calefati at 916-441-2101. Follow her at Twitter.com/calefati. Read the Political Blotter at IBAbuzz.com/politics.

WHAT THE BILL WOULD DO
Starting July 1, 2015, grocery stores and pharmacies would be barred from making single-use plastic bags available to customers. And by the following July, convenience stores and liquor stores would be subject to the new rules, too.
– Customers would be encouraged to bring their own reusable bags when they shop, but customers who forget would be charged at least 10 cents for recycled paper or reusable plastic bags that meet standards for durability.
– The bill would offer competitive loans and grants to plastic bag manufacturers that retool their operations and make reusable plastic bags instead. To qualify for these benefits, companies would need to retain and retrain their workers.
Any local bag bans already in place when the bill goes into effect would be grandfathered in, but the bill’s requirements would supersede any local ordinances passed after the bill’s effective date.