Very exiting news indeed!! The Ocean Cleanup Project reached $2 million in crowd-funding to build cleanup contraptions designed to intercept and remove plastic from the ocean. The world’s oceans contain millions of tons of garbage, much of it plastic debris that collects in gyres that span hundreds of miles. Boyan Slat, an aeronautical engineer and founder of the Ocean Cleanup, has been contemplating how best to attack this problem since the age of 16.

The solution he came up with is to deploy several V-shaped floating barriers that will be moored to the seabed and strategically placed in the path of major ocean currents precisely in the gyres. The 30-mile-long arms of the Vs, he says, will catch buoyant garbage and trash floating 3 meters below the surface while allowing sea life to pass underneath. In June, Boyan Slat, together with a team of about 70 scientists and engineers, released a 530-page feasibility study (pdf) that explains the technology and explores questions of legality, costs, environmental impact, and potential pitfalls. The Ocean Cleanup also kicked off a campaign to raise $2 million to construct and test large-scale pilots.

Slat’s team announced that the funding goal had been achieved in 100 days with support from more than 38,000 donors in 160 countries. They expect the first pilot to be deployed within a year, and they plan to have a fully operational offshore cleanup array in 3 to 4 years.

Posted on TheOceanCleanup website under the funding section here are the updates:

On September of 2014, The Ocean Cleanup successfully completed the crowd funding campaign to start the Pilot Phase, raising about 2.1 million dollars (U.S) in the process. Collaborations with companies and institutes will be initiated in order to significantly reduce costs, enabling us to again perform the large R&D projects with a limited amount of budget.
To reduce the uncertainties, to optimize the design and to prepare for the actual implementation, The Ocean Cleanup now commences on the second phase of the project: the pilot phase.
Through a series of up-scaled tests, The Ocean Cleanup will work towards a large-scale and fully operational pilot in 3-4 years’ time. The series of tests will generate new data in a range of structural and physical topics. Furthermore, these up-scaling tests will serve as a platform for the engineering and oceanographic research groups, enabling them to immediately implement newly developed technology or testing equipment in a real-life environment. 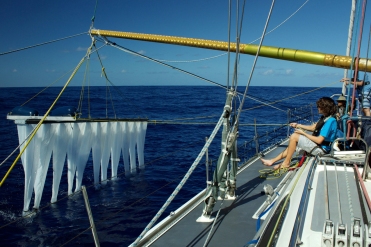 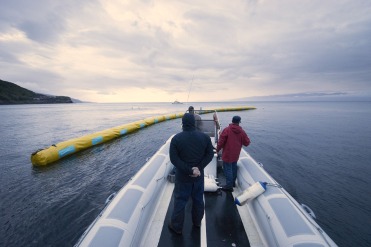 We would like to share some of the answers Boyan has provided to many questions that you might also have. They are precise and enlightening on the feasibility of the project and the implementation of this coming Pilote Phase.

“It’s a great story, but it’s just a story. (…) Gyre cleanup is a false prophet hailing from La-La land that won’t work (…) Slat’s project as it stands is in the fairy tale phase…”
Boyan: We have just published a 530-page report, concluding that The Ocean Cleanup Array is a feasible and viable method for large-scale gyre cleanup, marking the successful end of the preliminary engineering phase. Because of its length and diverse nature, a journal won’t publish it. Hence we have asked external experts to do an informal peer review, which the report passed. Furthermore, part of the report (the plastic processing, the vertical distribution and computational fluid dynamics) will be separately published in a journal. We are currently increasing the size of the vertical distribution dataset through new expeditions, in collaboration with the Royal Netherlands Institute for Sea Research.

“The problem is that the barriers to gyre cleanup are so massive that the vast majority of the scientific and advocacy community believe it’s a fool’s errand”
Boyan: We have now engineered a new floating barrier, that can span the 100 km that is needed to collect almost half the plastic within 10 years. To be sure it stays in one piece, we used a safety factor of 2.5x to 3x, which is much higher than the offshore standard of 1.82x, to be able to accommodate the weakening of the materials due to fatigue. (feasibility study, chapter 3.6). The new design furthermore enables the buoyancy element to move with the waves, which prevents plastic from splashing over or underneath the boom. This has been confirmed with scale model tests. These scale models also showed that this new design can potentially reduce the loads on the tension-carrying element of the barrier by 60%, making our dimensioning even more conservative.

“Plastic isn’t just contained within the borders of the gyres, it’s everywhere in the ocean.”
Boyan: This is correct. However, The concentration within the gyres is orders of magnitude higher than that of outside the gyres. Law et al. 2014, for example revealed the median plastic concentration within the accumulation zone was 3.309 × 104 pieces km−2, while outside the zone the median value was 0 pieces km−2. Hence, it makes sense to focus on the gyres. But of course it does not mean we will get out all the plastic from the oceans. But we have shown that we can get out a significant proportion of this ocean plastic. (feasibility study, chapter 2.4)

“Every time a gyre cleanup proponent has shown me a design for addressing the problem, the first thing I ask is, ‘do you have the money to make 20 million of those doo-hickies?’”
Boyan: Using computational models predicting the concentrations and pathways of plastic pollution in the oceans, we have calculated that with only a single system, almost half the plastic from the Great Pacific Garbage Patch can be removed (feasibility study, chapter 2.6).

“The definition of plankton is an organism that can’t swim against a current; plankton have no control where they go and the assumption that they’ll somehow avoid the current that is taking the plastic into the processing thinga-ma-jiggy is a bad one.”
Boyan: Plankton indeed comes from the Greek word Planktos, meaning ‘wanderer’ or ‘drifter’. This is exactly why they won’t get caught. The ocean current passes underneath the floating barriers, taking all neutrally buoyant sea life (including both phytoplankton and zooplankton) with it, while positively buoyant plastics remain in front of it. Down to a certain particle size of course, where the force downward (the current) equals out the force upwards (the buoyancy force of the plastic). In collaboration with the Freiburg Institute of Advanced Studies, we simulated this hypothesis using Computational Fluid Dynamics simulations (CFD software and code used were LEMMA ANANAS, Comsol Multiphysics, and ANSYS CFX, if you’re interested), which confirmed our expectations; plastic gets caught, neutrally buoyant organisms do not. (feasibility study, chapters 3.3 and 3.4). So there is no centrifuging needed; plankton does not accumulate, while plastic does. But in the hypothetical case that all plankton that passes underneath these barriers would be damaged, the time it would take to restore that biomass is less than 7 seconds in a year. And that’s the worst-case scenario. (feasibility study, chapter 6)

“Anywhere where you have a platform, you’re going to have dead squid and flying fish stranding themselves, which will attract sea birds, and thus, guano. All of this stuff, coupled with salt, makes moving parts seize.”
Boyan: All moving parts are inside the platform, and hence not directly exposed to the elements. The lifetime and maintenance requirements have been determined in collaboration with Huisman Equipment, market leader in offshore equipment, i.e. this turned out not to be a problem. (feasibility study, chapters 4.2, 4.4)

“Perhaps one of the worst assumptions evident in this design is that the plastic will be on the sea surface. Researchers have shown that plastic suspends in the water column at 100-150 meters due to wave action and sea state.”
Boyan: This is misleading. It is true that the mixed layer can stretch to these depths during winter months, and it’s true that very small amounts of plastic can be found throughout the water column, but as our past 3 expeditions to the gyres have shown, the vast majority of plastics can be found in the top 1-3 m (depending on wind and sea state). This explains why researchers (as well as 5Gyres themselves) sample the surface layer of the oceans to measure plastic pollution. When we conservatively look at the data taken in winter months only, the surface layer contained 10x more microplastics than the layer at 4.5 m of depth. Hence our barriers stretch down to 3 meters, to capture the most of plastic. And in fact, here I am only addressing the small particles. The large plastics (that make up over 80% of the plastic in the gyres) are all at the sea surface. (feasibility study, chapter 2.2, 2.3)

“how do they stay in a ‘V’ shape that Slat assumes is needed to gather the plastic?”
Boyan: The booms are moored to the seabed at intervals of 4000 m. We calculated that at an angle of 30 degrees relative to the axis perpendicular to the current enables the plastic to travel at half the speed at which it arrives into the V. (feasibility study, chapters 3.4, 3.7)

“it shows that his estimates of how much plastic is out there aren’t correct and thus, his five year timeframe to clean a gyre becomes even more unrealistic.”
Boyan: The wind effect has been taken into account in the feasibility calculations, so this does not influence the figure that within 120 months almost half the contents of the Great Pacific Garbage Patch can be removed with a single system. This is very close to the estimate I personally made before the feasibility study, estimating a third can be removed in 5 years. (feasibility study, chapter 2.6)

“The public, for their part, loves the thought of a quick fix and wants to believe that a ‘boy genius’ can come along and solve a problem that all the old crusty PHDs can’t.”
Boyan: I think this is the part for which I have to credit my team. Although I am familiar with the contents of the report, and did contribute small parts to the report, I have mainly been involved with creating the circumstances in which my team could do the research. I believe we had about 10-15 PhDs co-authoring the report, and all other authors are indeed older and more educated then I am myself. 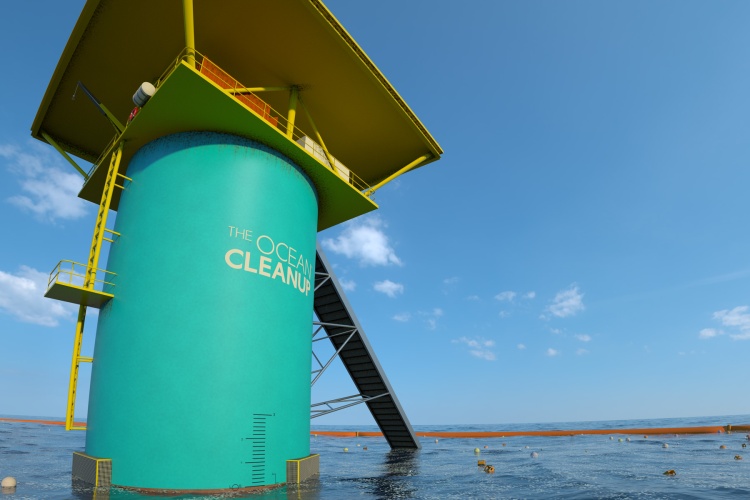